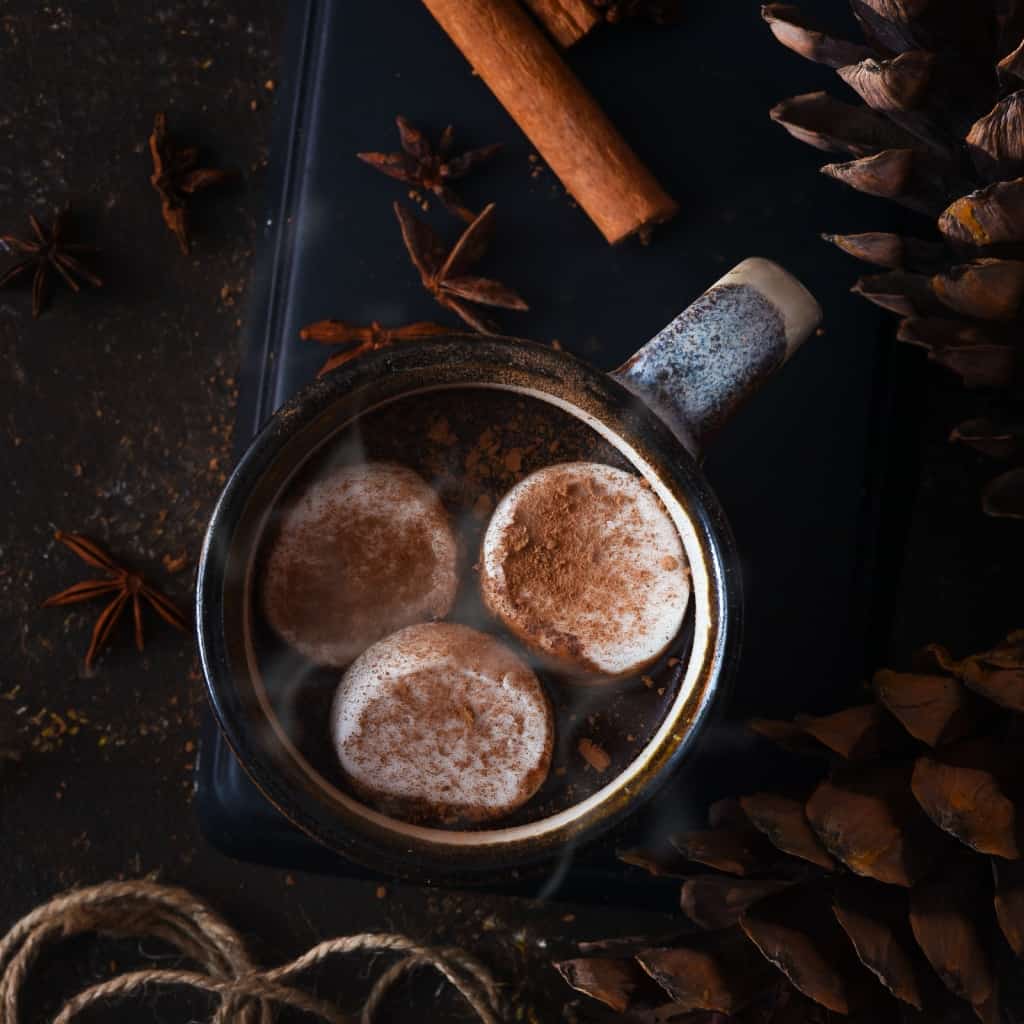 The classic Hot chocolate holds an affix with the winter. It’s a cosy and joyous concept, that we all cherish in the cold season.  When hands get a wintry numb, holding a cup of hot chocolate is a bliss.

I have a vivid memory with Hot chocolate that is very close to my heart. So it was our honeymoon and we were at the peak of Mount Titlis, with a white snowy ambience all around. After spending wondrous hours in the snow, we almost froze and had the best hot chocolate together. I remember the cafe, and the tables and even the design on my cup. But can’t recollect the name of the cafe. The richness and the smooth velvety feel of that hot chocolate are still alive on my taste-buds. That was my first encounter with a genuine hot chocolate. 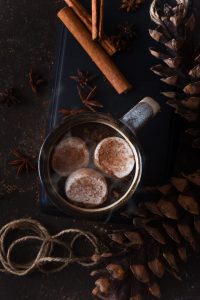 Most of us have our own versions of hot chocolate. Which is completely cool, as long as you enjoy that hot chocolaty drink, it does not matter, if it is made from chocolate syrup or cocoa powder. I am sharing the original hot chocolate, which is rich, creamy, velvety, and supremely chocolaty. I share an authentic recipe,  a few interesting facts and a few glimpses from the history of hot chocolate.

Cocoa beans/cocoa seed, grow in pods on the bark of the tropical Theobroma cacao tree” which means “food of the gods.”  These seeds are then fermented, dried, and roasted. The shells are removed, leaving the cacao nibs. The nibs are crushed into a thick paste called chocolate liquor (despite the name, it does not contain alcohol), which is made up of cocoa solids and cocoa butter. 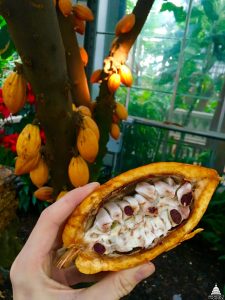 The terms Hot Cocoa and Hot Chocolate are often used interchangeably, but technically they are as different.

Hot cocoa is made with milk and cocoa powder, which is chocolate but is free of all its richness/ the fat of cocoa butter.

Hot chocolate is made from good quality chocolate, melted into the cream and full-fat milk which makes it a rich decadent drink. 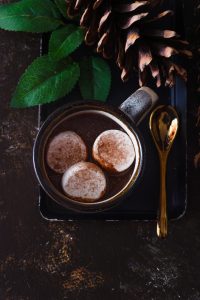 Chocolate was only a drink back then and the first true chocolate bar was invented in 1800.  Before that time, chocolate was a symbol of power, a privilege of warriors and the elite, and a satisfying tonic that was consumed daily and offered the sustenance needed to tackle virile challenges.

Between 3,000 and 4,000 years ago, cacao plants were first cultivated in Mesoamerica by the Olmec, living in southern Mexico.

The nibs from the cacao plant were ground into a paste and mixed with water to make a chocolate drink known as “xocolātl.” In order to achieve its frothy consistency, the mixture was poured back and forth between two bowls or jugs.

It was found to be an energy booster and mood enhancer, as well as providing long-lasting sustenance; these positive nutritional effects led the Olmec to believe the drink possessed mystic qualities, so it was generally reserved for important figures at sacred ceremonies. Chocolate was a  magical beverage, a treasure trove back then.

During the Revolutionary War, medics administered the beverage to wounded, sick or tired soldiers to expedite their recoveries, and soldiers themselves were allotted small portions of chocolate in their military rations to make the drink themselves. 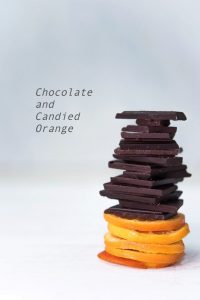 As the Spanish royalty intermarried with other European Royalty, cocoa was given as a dowry.  In 1643, when the Spanish Princess Maria Theresa (1638-1683) was betrothed to Louis XIV (1638–1715) of France, she gave her fiancé engagement gift of chocolate, packaged in an elegantly ornate chest.  A royal chocolate maker was appointed and chocolate drinking became the rage.

In 1631, the first recipe for a chocolate drink was published in Spain by Antonio Colmenero de Ledesma, an Andalusian physician, in his book

The ingredients in the recipe were:

“Take one hundred cocoa beans, two chillies, a handful of anise seed and two of vanilla (two pulverized Alexandria roses can be substituted), two drams of cinnamon, one dozen almonds and the same amount of hazelnuts, half a pound of white sugar and enough annatto to give some color.  And there you have the king of chocolates.”

1800’s – The first “chocolate box” was introduced by Richard Cadbury in 1868, when he decorated a candy box with a painting of his young daughter holding a kitten in her arms.  Cadbury also introduced the first Valentine’s Day candy box. 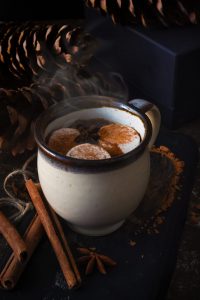 Hot Chocolate Around the World

The hot chocolate of Vienna is perfect which is unbelievably dark, rich, and thick. This drink is for the serious chocolate lover. I have loved it, enjoyed it and relished it during my trip last summer.

In Spain, they like their hot chocolate like they do in Italy — as thick as pudding. The difference in Spain is that they serve it with crispy fried churros. Think of it like dipping long crispy doughnuts into your hot pudding for breakfast. Yummers!

Submarino is Spanish for submarine and that’s exactly what this hot chocolate drink is like. Little bars of chocolate are dropped into hot, steamy milk and they sink like a submarine. The hot milk melts the chocolate which is then stirred to make a tasty, sweet, belly-warming mixture!

Even though it rarely gets very cold in Mexico (like it does in Canada), they still enjoy a hot chocolate drink called champurrado. Different versions include cinnamon, spicy chilli powder, nutmeg or star anise. They will also add masa harina to thicken the drink — the same corn-based dough Mexicans use to make tortillas for tacos!

In Belgium Dark and milk chocolates are carefully stirred in until melted. A pinch of cinnamon is added for an earthy note and a dollop of whipped cream completes the bliss.

In China, its cocoa powder, rock salt, condensed milk, whipped cream and cream cheese are added to the milk. It is served cold, as a drinkable chocolate cheesecake.

In France Hot Chocolate so intense you’ll need a nap afterwards. It is is more akin to melted fudge or a pourable ganache. 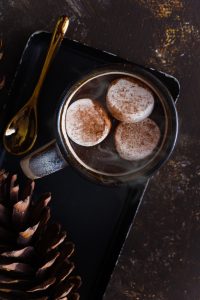 Storage: Store leftovers in an airtight container in the refrigerator. Reheat gently over low heat. 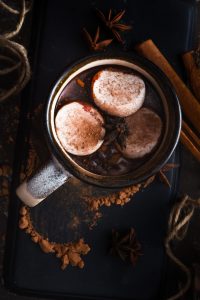 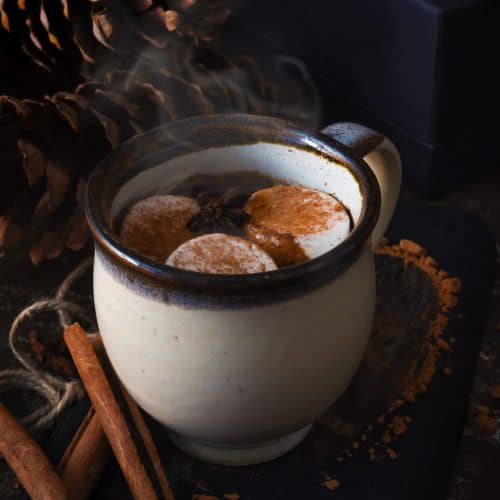