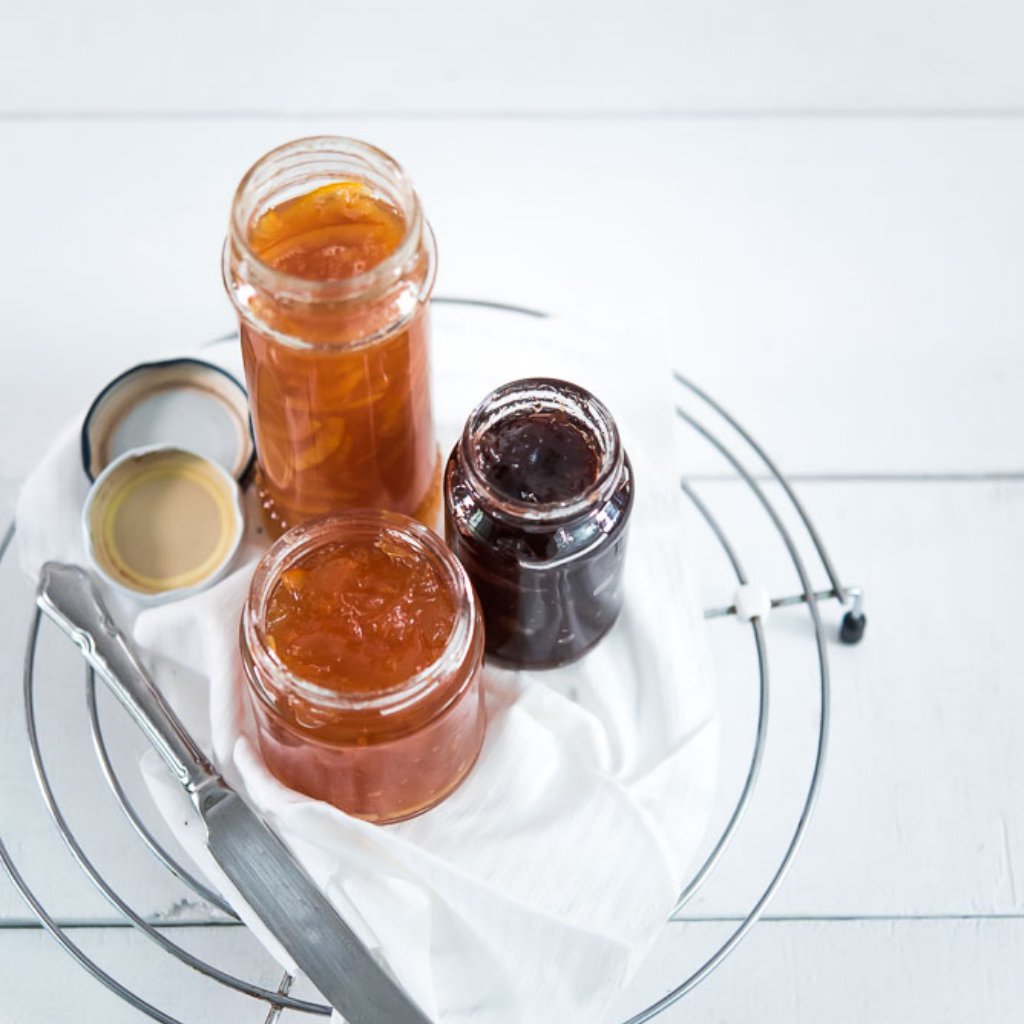 I love to preserve seasonal fruits. Deep freezing strawberries and peas is what I do every year. Making jams and marmalades at home is another great way to use season fruits.

Do you often get confused with marmalade / jam / preserves / conserves etc.?

It’s kind of confusing, and we all go through the same feeling when a recipe on google says cook till the desired consistency —— oops or when it says the wrinkle test —— jam passings a wrinkle test and me judging … it leaves most of us … absolutely clueless. 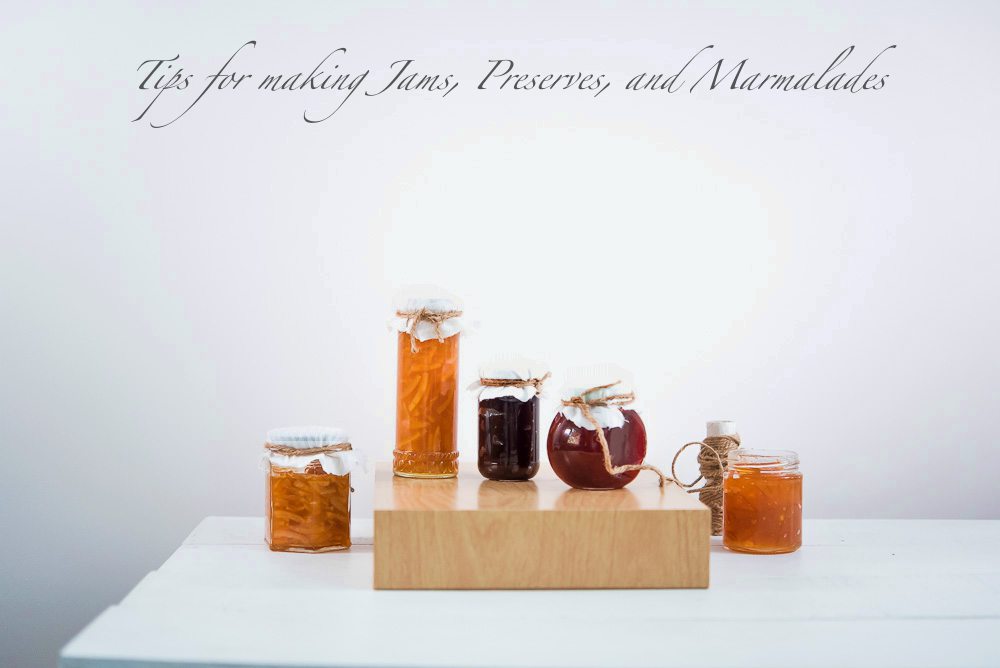 Last week I made marmalades and jams with the help of a friend who have be making jams etc since a decade now. I sure, learnt a lot and have all my queries answered. You are gonna find your jam marmalade related answer below. And if by any chance, you still have some confusion, feel free to ask in the comments.

Let’s start with the very beginning because it is very important to understand the basic. 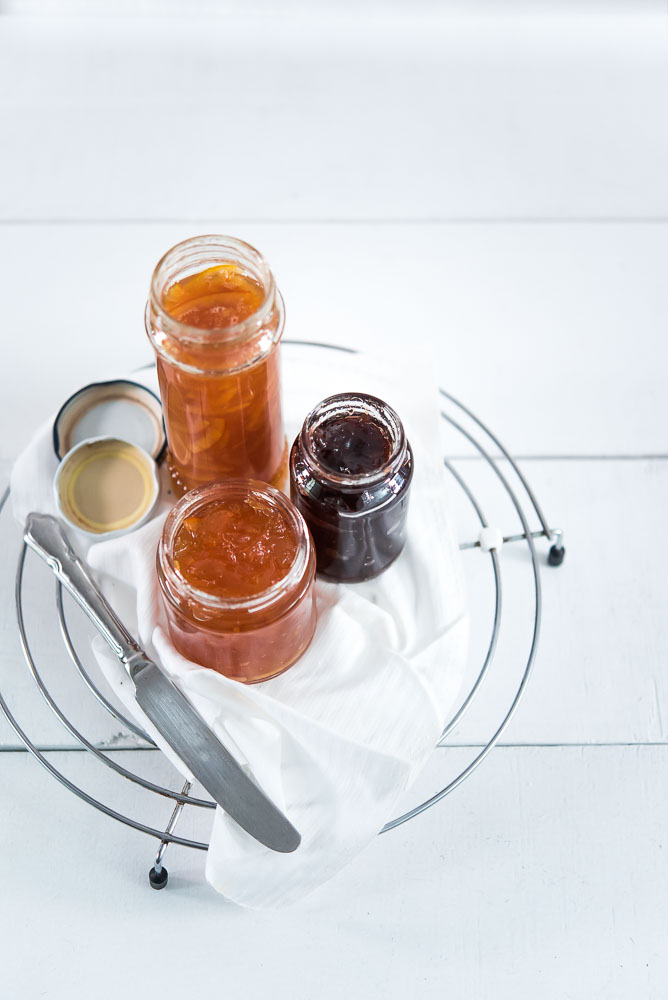 What is marmalade / jam / preserves / Conserve ?

Jam: made from whole fruits, cooked with sugar until the mixture reaches spreadable consistency. Jam does not have fruit chunky like preserves, jam is typically more solid and substantial than jelly.

Some recipe call for added pectin (a substance that makes everything gel and stick together), depending on the amount of natural pectin present in the fruit.

Preserves:  is a term often used to describe all fruit spreads. It’s made up of chunks or whole fruits that are cooked in sugar until they are soft and spreadable consistency.

Marmalade: a jellylike preserve in which small pieces of fruit and fruit rind adds the texture and flavours. It is made in a technique most similar to jelly, but containing chunks of fruit. It is traditionally made with citrus fruits. Marmalade includes the zest along with some chunks of the fruit itself; the addition of the skin of the fruit gives marmalade a slightly bitter flavor along with its sweetness; because of the high level of pectin in citrus skin, marmalade doesn’t usually have added pectin.

Conserve: Chunkier jam that includes large pieces of fruit, dried fruit, nuts. A conserve can be used like a jam.Usually a combination of 2 or more fruits, often with dried fruit and nuts, cooked with sugar. Conserves usually have chunky texture and are served often with cheeses and meats. 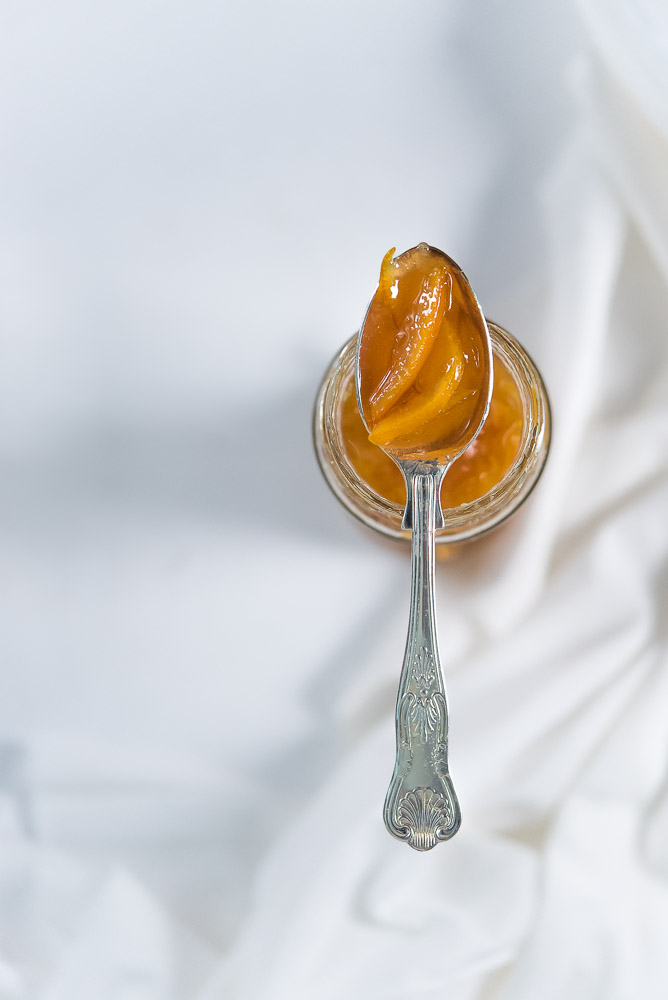 We all know that Jams, marmalades, preserves, and conserves are fruit products preserved by sugar. Sugar does a lot more than just sweeten the jams. Sugar acts as a preservative that helps maintain the beautiful colour of the fruit and inhibits mould growth. Its another function is to work with the pectin and fruit acids to form the gel structure in the jam.

Always use the exact amount of sugar called for in the recipe. Reducing the amount of sugar will upset the balance of fruit, sugar and pectin needed to ensure the jam or jelly sets. There should also be enough sugar in the mixture, roughly double the weights of fruit and sugar.

Avoid caster sugar – its fine crystals are ideal for creating a fine crumb in baking, but in marmalade making you want larger crystals that will dissolve slowly.

Dark brown sugars add depth and darkness to make moody marmalades. They should be added only if the recipe calls for them or when you are really confident at creating your own recipe.

Some recipes ask you to heat the sugar in a low oven before adding it to the pan. This stops the temperature in the pan from decreasing when the sugar is added and, consequently, reduces cooking time, which is preferable; shorter cooking time = brighter fruit flavour.

Don’t forget: all the sugar crystals must be dissolved before you turn up the temperature and boil for setting point. This may take 20 minutes or more. 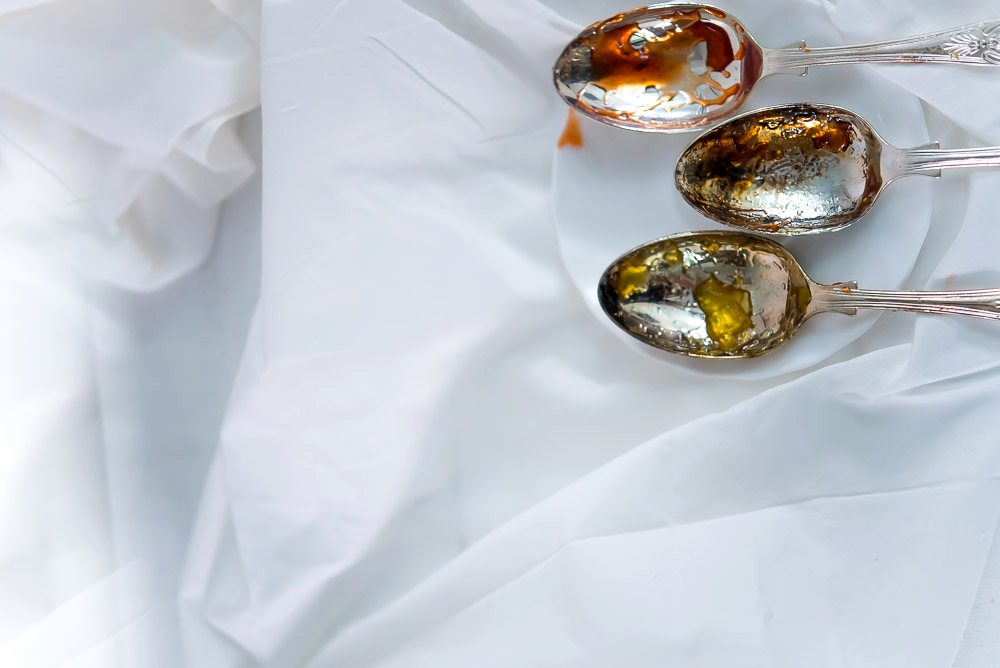 Pectin is the glue that sets marmalades and jams to a glossy gel. It is a long chain of carbohydrates called a polysaccharide. It’s found in the cell walls of all terrestrial plants, helping to give structure to stems, leaves, flowers, and fruit. It’s most concentrated in the skins and cores of fruit.

Fruits like blueberries, strawberries, cherries, contain little pectin. You can make thicker products with these fruits by combining them with fruit rich in pectin or by adding extra powdered or liquid pectin.Purix Natural Pectin (75g)

Different types of fruit contain varying levels of naturally occurring pectin. The pips and pith of Seville oranges we are using today are particularly rich in pectin. This is why the recipe will ask you to collect the pips and pith in a muslin pouch to simmer with the chopped peel before the sugar is added. The long simmer releases the pectin into the liquid and is usually followed by a good squeeze of the muslin pouch to ensure every last bit has made it into your marmalade to make it set.

Pectin needs partners – to work – so acid and sugar,  do the job of gelling properly. Acid helps extract pectin from fruit during gentle simmering and helps the gelling process, which will not take place unless the mixture is fairly acidic. If fruits (such as apricots) aren’t sufficiently tart, a recipe will call for added lemon juice.

Always use undamaged fruit. Fruit with too much damage will spoil the result, and the jam is likely to deteriorate quickly. Ensure all equipment you use is sparkling clean. 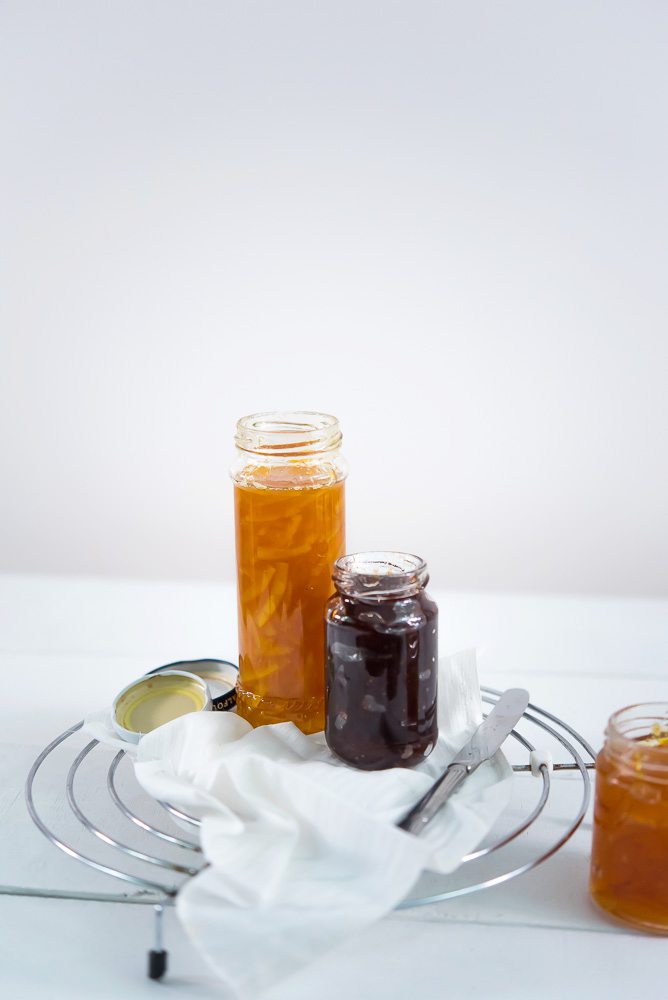 You can also check for setting point using the “wrinkle” test. Before cooking the jam put 3 or 4 small heatproof plates in the freezer. Once your jam has boiled for several minutes, take the pan off the heat and carefully spoon a little jam onto one of the cold plates. Let it stand for a minute then push the blob of jam with your finger, if the surface of the jam wrinkles then it has set, if it is still quite liquid then put the pan back on the heat and boil the jam for another 3 to 5 minutes before testing again.

The important point to remember is – Pectin can also be destroyed by extended boiling so make jam in a large saucepan (the fruit and sugar mixture should not come more than one third up the side of the pan) so that the mixture boil rapidly, and start testing for setting point fairly early. 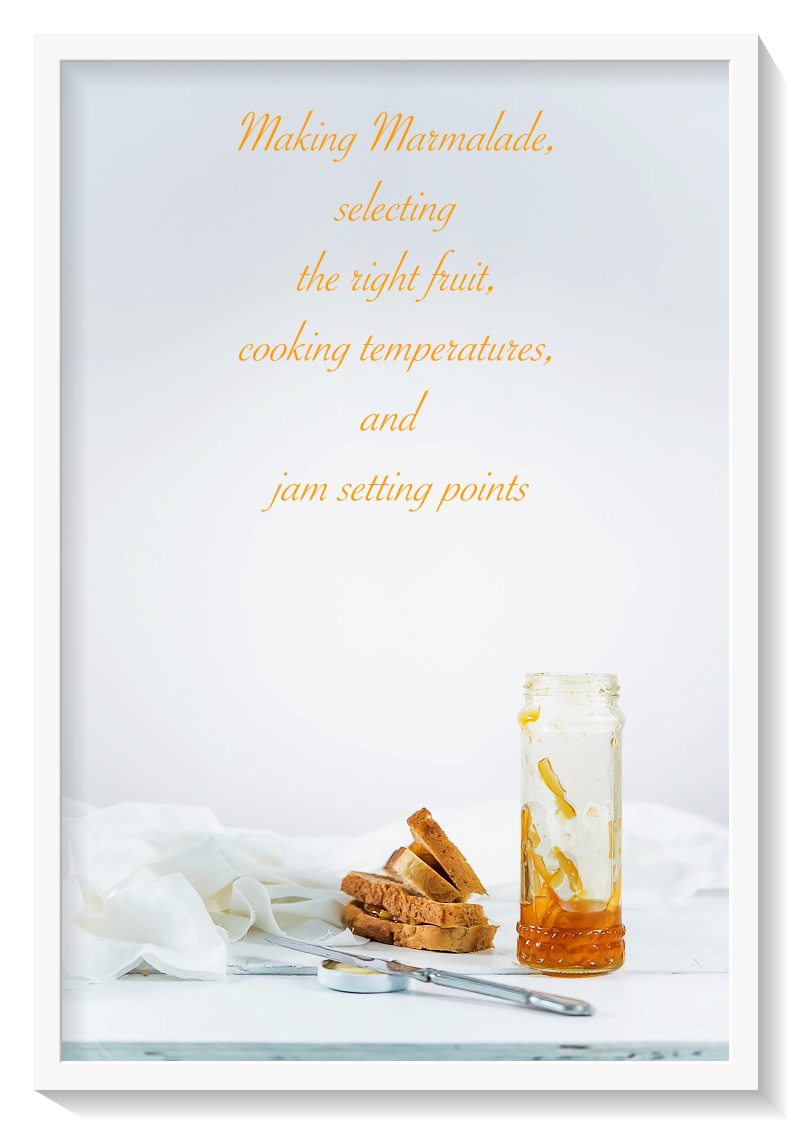 Don’t overcook your marmalade – While you’re testing your marmalade to see if it’s set, take it off the boil. Otherwise you risk boiling away the water content, and ending up with a dark, over-thick marmalade that’s dry and rubbery.

Cool before potting – but not too much – Allow your marmalade to cool and relax before potting. This allows the mixture to thicken slightly so that the peel, when potted, remains evenly distributed throughout the jar. However the marmalade should still be above 85ºC Taylor Candy and Deep Fry Stainless Steel Thermometer

to kill any mould spores. Once potted put the lids on as quickly as possible to create a vacuum.

Always use clean, sterilise jars to store the marmalades or jams. To sterilize, wash in hot soapy water, rinse well and place upsidedown in a cool oven for at least half an hour.

Cover the surface of the jam in the jar with a wax paper disc. This helps prevent mold forming during storage. Seal the jar with a tight-fitting lid or cellophane disc secured with an elastic band. Store in a cool, preferably dark place. Only store in the refrigerator once opened. 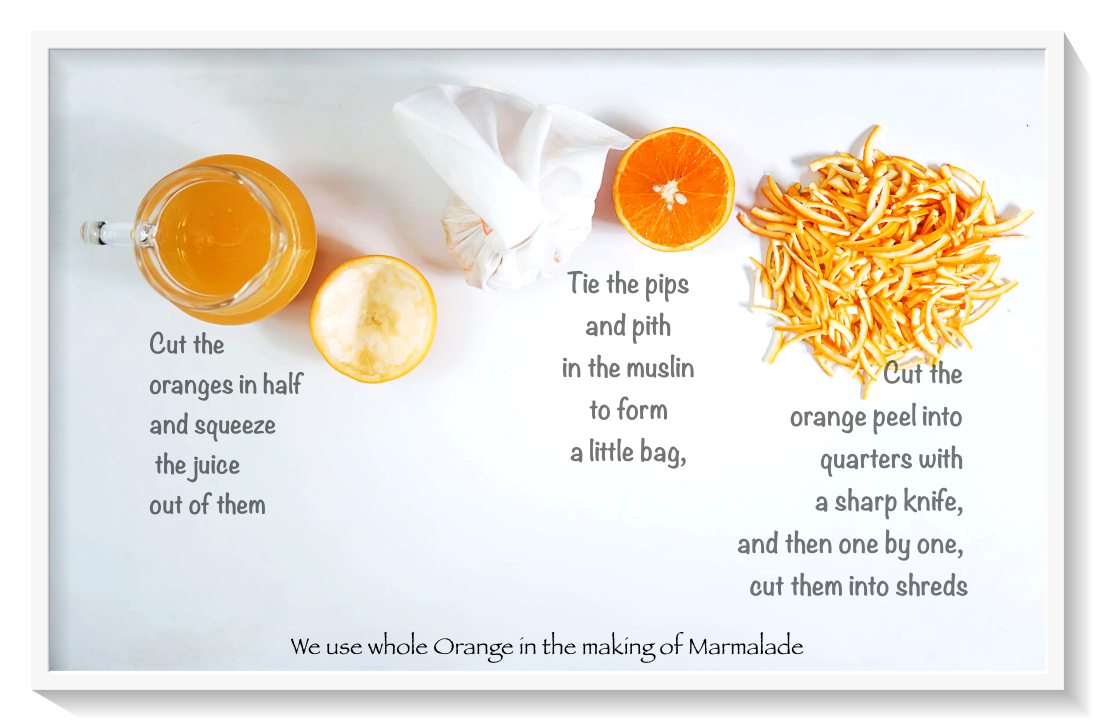 Begin by 2.5 litres of water into the pan, then cut the lemon and oranges in half and squeeze the juice out of them. Add the juice to the water and place the pips and any bits of pith that cling to the squeezer on a piece of muslin.

Now cut the orange peel into quarters with a sharp knife, and then one by one, cut them into shreds (I find it easier with a small serrated kitchen knife and the shreds can be either chunky or thin). As you cut, add the shreds to the water and any pips or spare pith you come across should go onto the muslin.

The pith contains a lot of pectin so don’t discard any and don’t worry about any pith and skin that clings to the shreds – it all gets dissolved in the boiling. 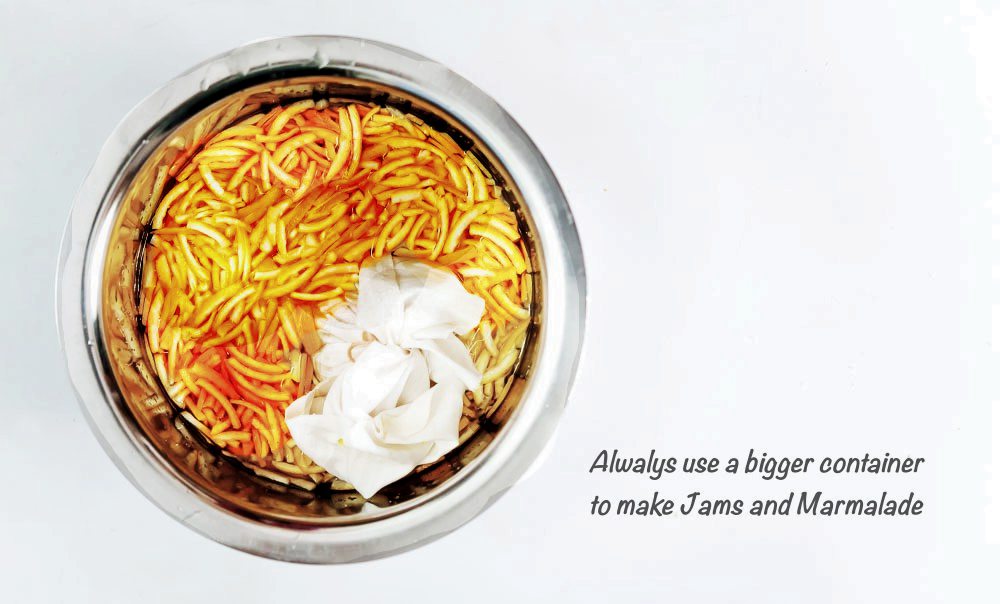 Now tie the pips and pith in the muslin to form a little bag, and keep in the pan with the rest of the ingredients. Then bring the liquid up to simmering point and simmer very gently, uncovered, for 2 hours or thereabouts, until the peel is completely soft (test a piece carefully by pressing it between your finger and thumb, if you can squeeze it in half the peel is ready).

Meanwhile, chill three side plates in the fridge or the freezer compartment of the fridge as mentioned above.

Then pour the sugar into the pan and stir it now and then over a low heat, until all the crystals have dissolved. After all the chrysalis resolve increase the flame to medium and cook under supervision.

Give it an occasional stir, after every 5 minutes, remove the pan from the heat and spoon a little of the marmalade onto one of the cold plates from the fridge, and let it cool back in the fridge, for a few minute.

When it has cooled, you can test if you have a ‘set’ by pushing the mixture with your little finger: if it has a really crinkly skin, it is set. If not, continue to boil the marmalade and give it the same test at about 5 minute intervals until it does set. You may need to test it two or three times.

you can easily skip the wrinkle test and cook till the temperature reaches to 105c (220F).

After that remove the pan from the heat. If there’s a lot of scum, most of it can be dispersed by stirring in half a teaspoon of butter, and the rest can be spooned off. Leave the marmalade to settle for 20 minutes.

In the meantime, the jars should be washed in mild soapy water, rinsed and dried and heated in a medium oven for 5 minutes.

Pour the marmalade, with the aid of a funnel and a ladle, into the warm jars, (so that it goes right up to the neck) cover with waxed discs (wax side down) making sure you cover all the surface and put the lids on while still hot. 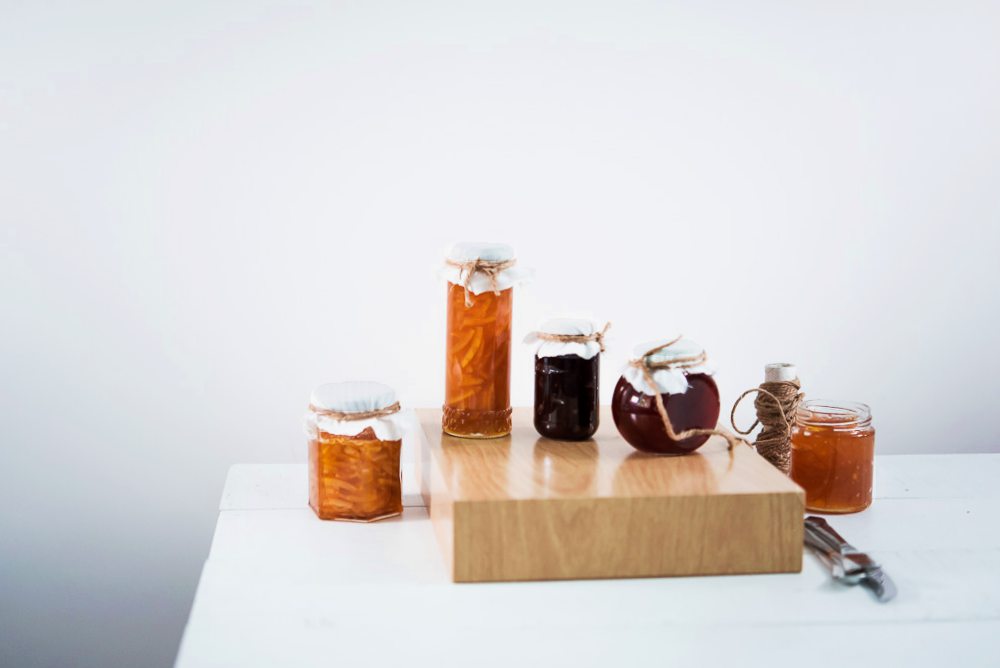