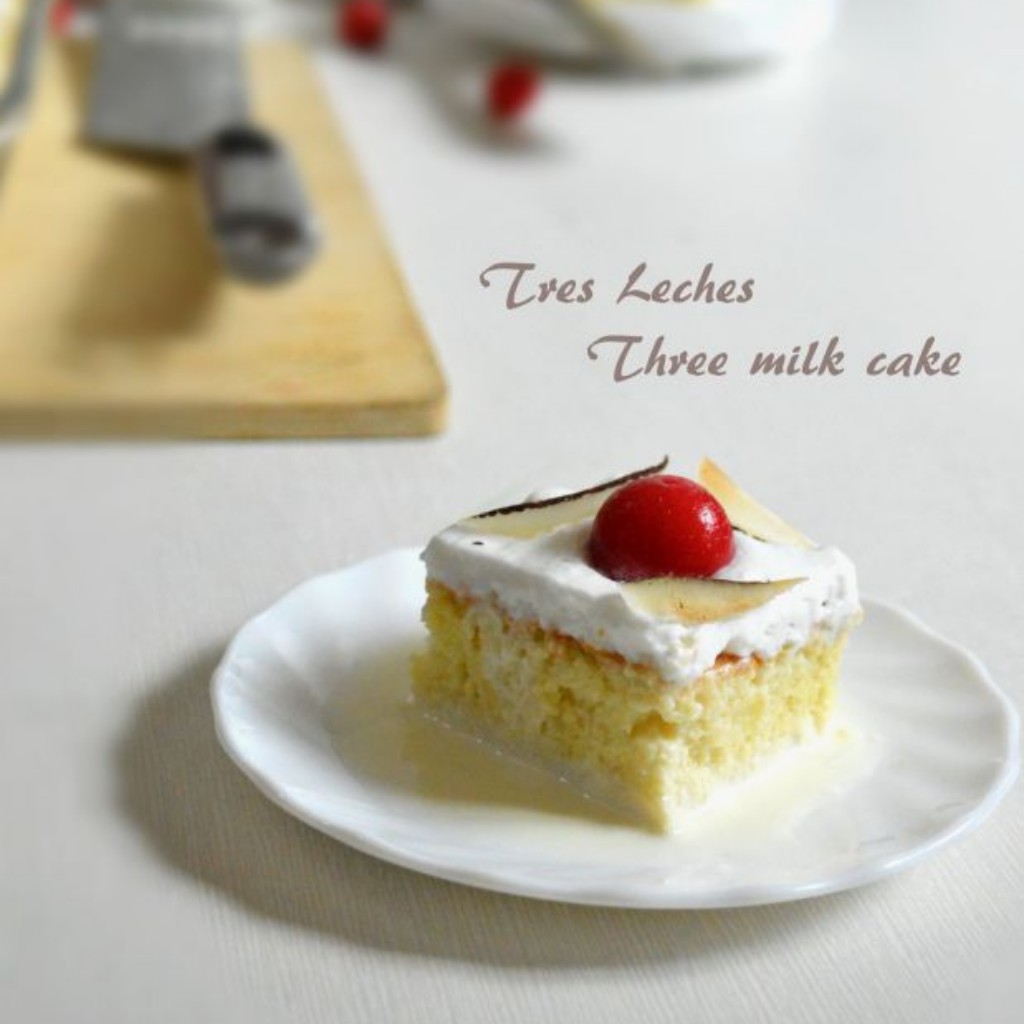 The cake changed the whole scenario of always chocolate cake at home. Surprisingly kidos and Pranav not only liked but loved Tres Leches.

Sides effects of being a blogger is that the taste buds at home (family members-Guinea pigs-the critics) are becoming hard-to-please. The comparison among the food prepared is massive now.  Now you see, why I am not been able to post the recipes very often.

Tres Leches have been in my list of favorites since long. I remember tasting and falling for it in Zurich. The cake was like sponge soaking up the delicious milk syrup. It was just the right sweetness, density and “mouth feel” for a rich cake. And I am so eager to share this recipe on my blog. If you make it, you are gonna love it too.

Tres leches cake, is also called three milks cake and is prepared using three different types of milk in it. Evaporated milk, sweetened condensed milk, and heavy cream. I know the next question you have in mind is what is evaporated milk.

The good feature of this light, airy sponge cake is that butter or oil is not used in the making. Less calories—-wopeee  But lots of eggs are required to make this yum cake. (please don’t ask me substitute of eggs in this recipe) Tres leches requires a particular texture, which does not allow the cake to get soggy, despite being soaked in a mixture of three types of milk.

1. Accurately measuring of ingredients and preheating of oven at least for 10 minutes, are two must dos.

Ignore that fancy tray kept in the ingredients picture, because that is a silly idea that occurred to me. I first bake this cake in that dome shaped cupcake tray, assuming the cake will look awesome. But I was not able to take the sponge out after it baked. The cake was so tender that I was left with broken pieces and a messy tray to wash.

Attention to the eggs; Eggs needs to be room temperature. You will need to separate whites and yolks. Making sure that no yolk (or shells) fall in with the whites. The trick here is separate your egg whites from yolks when the eggs are cold. Then leave them at room temperature at least for an hour.

While whisking egg whites add a pinch of cream of tartar, it helps stabilize egg whites once they’re beaten and it assists them in the fluffing process as well. If you don’t have cream of tartar on hand, you can substitute it with a drop or two of lemon juice. Beat the whites till stiff peaks.

You’ve reached stiff peak stage when the egg whites are smooth, moist, shiny, and the tips can stand straight up.

3. Always fold the dry ingredients to the wet ingredients, never mix them vigorously. Specially in this cake; because we are looking for a very particular texture.

4. Once the cake has baked and cooled, grab a long skewer or a fork and poke a bunch of holes throughout the cake. I know that sounds weird, but just do it. We will be soaking the cake with the three milk tasty liquid and these holes will make sure that the cake is moist throughout.

5. Cover the cake with plastic wrap and refrigerate for a few hours. It’s important for the cake to chill for at least 3 hours so that it firms up a bit. It’ll give the milk a chance to set in and allow the cake to absorb it.

6.Top each slice with whipped cream and a cherry, right in the middle. I like to dry the cherry a bit with a paper towel so that the red color syrup of tinned cherries doesn’t bleed onto the cake.

7.You can infuse the milk with different flavors like coconut. Use coconut milk in place of one of the other milks, if you’d like. You can also sprinkle flaked coconut on top to really enhance that coconut flavor. (I used lightly tossed coconut on the top) You can also use in chunks of canned pineapple along with cherries. Or make coffee flavored tres leches. Add cold brewed coffee and coffee flavored liqueur to the milk mixture for that perfectly flavored coffee dessert.