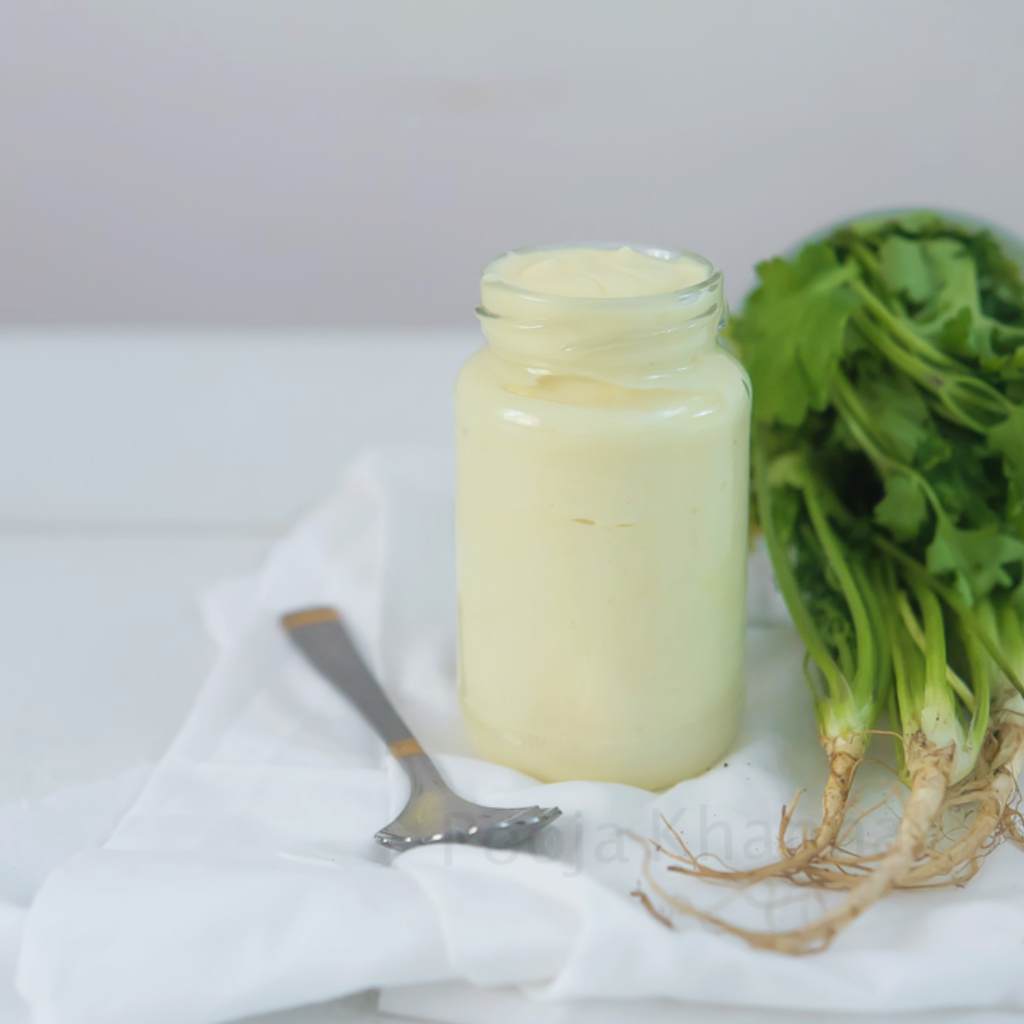 Today we are discussing – All about Mayonnaise, eggless and with egg, What is the difference between both, What is the best way to make mayonnaise at home, The do’s and don’ts of making mayonnaise, and even the story behind mayo recipe.

I am sure after you read this post, you will stop buying mayo jars from the market. Every time you need mayonnaise. You can whip up a fresh batch with in 5 minutes whenever needed.

Let’s talk all the how’s and why’s of making mayonnaise at home. 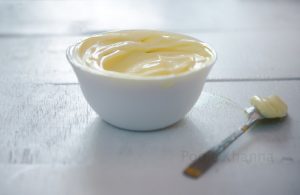 Mayonnaise is an emulsion (means, a mixture of two liquids that normally can’t be combined). Combining oil and water is the classic example for emulsification. When making mayonnaise Emulsifying is done by slowly adding one ingredient to another while simultaneously mixing rapidly. The process disperses and suspends tiny droplets of one liquid through another.

The classic mayo is made by blending egg yolks and oil, then flavoured with varying combinations of vinegar, mustard, herbs and spices.  It’s like a magic – Taking two runny, liquidy ingredients i.e. egg yolks and oil, combine them with a bit of mechanical action, which results in a thick, creamy, dippable, spreadable condiment. 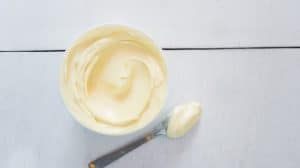 The classic technique of making mayonnaise is time-consuming + there is a risk that you end up with a runny consistency. Most of the mayo recipes will tell you to add oil drop by drop while blending, which ends up combining to liquids (emulsifying).The quickest way is to use a stick hand blender, and use the jar container that comes with the blender, to make mayo.Philips HR1351/C 250-Watt Hand Blender with Chopping Attachment (White) 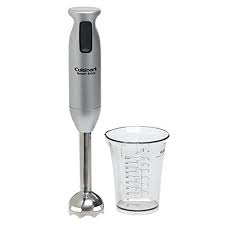 The idea is that, you can add all of your ingredients—oil included—directly to the blending cup. Because it is less dense than the other ingredients, the oil will float at the top. When you subsequently stick the blades of the stick hand blender down into the jar, blades will be in direct contact with the egg yolk, water, acid, and mustard. Turn that blender on, and it creates a vortex, gradually pulling the oil down into the whirling blades.

As it starts whizzing, slowly pulling out the wand as you go. The vortex pulls oil down towards the base where it gets emulsified by the rapidly spinning blade. It works, believe me, this is the quickest and easiest way to mayonnaise at home.

Using the same method, the mayonnaise can be made with egg and without egg. I have here both the recipes for you. I have tried both, and they are quick and turns out equally delicious. You will hardly feel any difference in the appearance or in the taste when comparing eggless mayo with a mayo made using eggs.

Just a couple of points before we get to the recipes:

1. Many people complain that the mayonnaise never comes together when blending. It can be as simple as you are using a  wrong jar to make mayonnaise.

It is important that the jar you use should be just slightly larger than the head of the immersion blender, as the egg/lemon or vinegar mixture must be in contact with the blades of the blender before you switch it on for this to work. As shown in the image above. Ideally, the jar that comes with the stick blender is perfect to make mayo.

2. If your mayonnaise is watery, that means it has not emulsified properly, and no amount of additional blending is going to fix that. Your best bet is to let the mixture settle and separate, then try again. 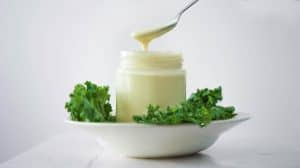 3. For eggless mayo, you will need chilled cream. And for making mayo with eggs, make sure egg is at room temperature.

4. Since homemade mayonnaise made using egg is uncooked, be sure to use the freshest eggs possible, and ones that you are reasonably sure are free from salmonella.

5. This is interesting that one egg can bind a lot of oil. In other words, if you want to make a bigger batch, just increase the amount of oil, mustard, spices and acid. So oil quantity can be increased (but within limits) when making mayos with egg.

When making an eggless version, I suggest stick to the quantity mentioned. 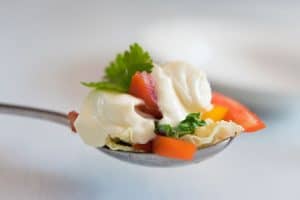 6. Prepared mayonnaise will thicken more, in the fridge. After about an hour in the fridge, the mayo I prepared turned out super creamy and thick, that I was able to make a swirl with the back of the spoon, and was able to pipe it on this salad spoon for this photograph above.

7. Once the mayo is prepared, you can add the flavouring you like. Or just sprinkle a pinch of cayenne pepper powder for an extra flavour boost. 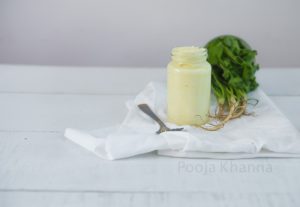 Mayonnaise as we know it today did not appear until the 1800s. While some culinary historians observe that a mayonnaise-like mixture of olive oil and egg was consumed by ancient Egyptians and Romans, the mayonnaise that we know today—an emulsion of oil, egg and lemon juice and/or vinegar, plus seasonings—was developed by one of the great chefs of France.

As the story goes, the Duke’s chef had no cream and substituted olive oil, naming the new sauce “Mahónnaise” in honour of the victory. There are various reasons given for the evolution of the word to mayonnaise—from typographical error to the old French word for egg yolk, moyen and manier, to stir or to blend.

What I found researching: is that years after its debut, the great French chef Marie-Antoine Carême (1784-1833), founder of the concept of haute cuisine, lightened the original recipe by blending the vegetable oil and egg yolks into an emulsion. It was his recipe that became famous throughout Europe, and subsequently, the United States and the world.

Its also mentioned that the French concept of “mother sauces” (sauces mères) developed in the 18th century. Mayonnaise is one of the five seminal mother sauces, which also include sauce espagnole, tomato sauce, béchamel, velouté and hollandaise.*

Each culture developed its own style, using favored ingredients and techniques. 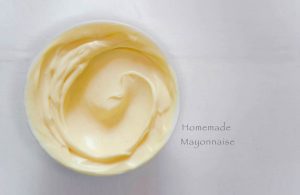 Oven or Microwave or OTG – What to buy? Which to buy?