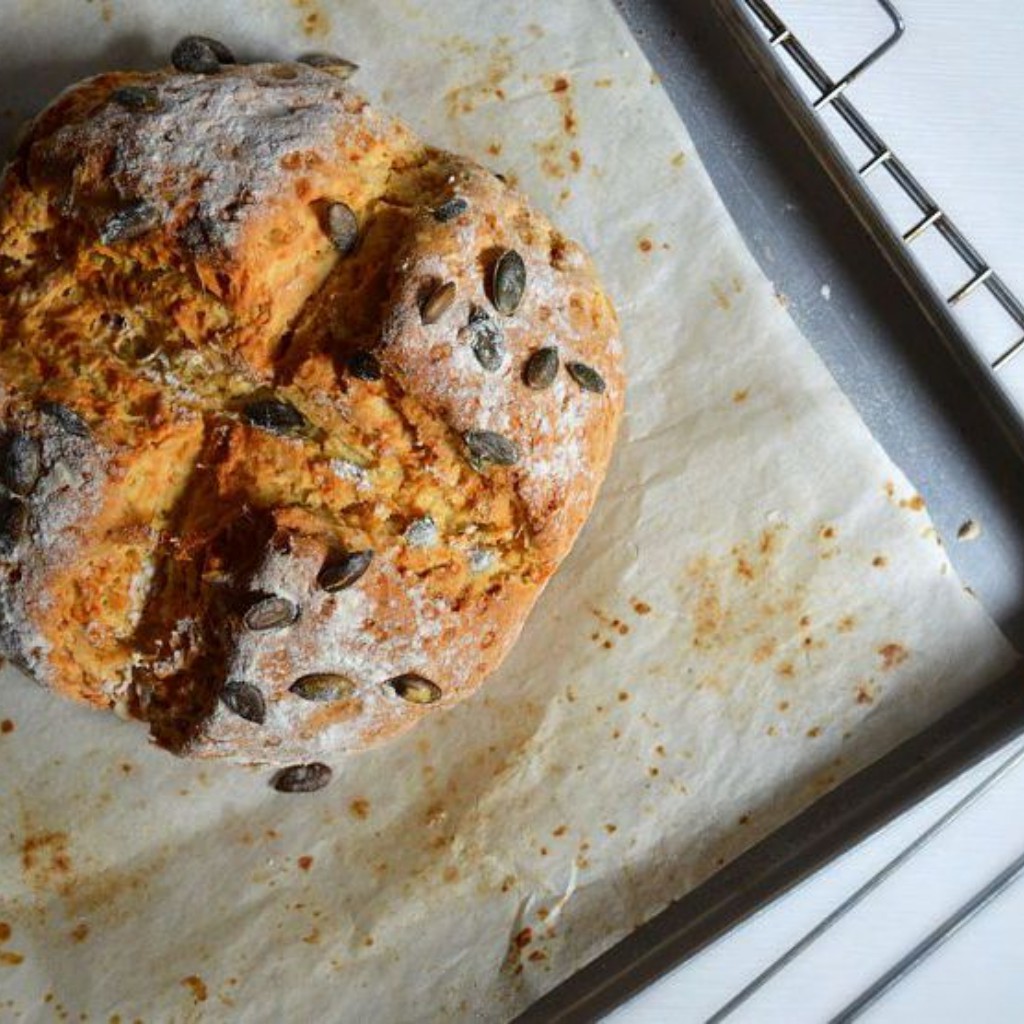 There is no yeast in this bread! This gorgeous rustic looking bread is called Soda bread. The bread does not need any proving or kneading. You can have a yumm fresh baked bread to serve within an hour.

It’s quite an easy recipe which will not require any special equipment, just your hands and the basic ingredients. I can assure You, that you will be able to make soda bread in your kitchen even if you are new to baking.

Soda bread has uneven golden crust, I particularly like the crisp exterior. Inside the bread is tender and kind of dense (actually dense is not a right word), it’s more like a cake bread but quite delicious one. It is an amazing contrast of texture between the crisp outside and soft caky inside. Its yumm when served with butter and jam or served alongside a hot bowl of soup.

Let me start with the recipe but before you start, just go through these points:

As the name says it is soda bread; it gets its rise from baking soda (soda bicarbonate) not with yeast. It is very important to get the balance right. Too much soda will make the bread taste weird. So go with the accurate measurements of the ingredients. Soda should be just enough to rise the bread, not enough to spoil the flavours.

We will be using buttermilk to moist the flour, as buttermilk reacts with baking soda and kick-starts the rising process. To make the buttermilk – add half a tablespoon of vinegar or lemon juice to one cup of milk. Stir it once and let the mix sit on the kitchen counter for 2 to 3 minutes.

It is important to work with a quick light hand while making the dough. Don’t over work the dough while mixing the ingredients or while kneading.

Once the dough is formed in a round; it is important to slash a x in the centre. This helps bread cook all the way through and prevents the uneven splitting during the baking. And also gives the bread its signature style. Which is kind of a cool look.

I have used butter in the recipe, you can skip that. But I think it adds a lot to the flavour. Just make sure the butter is cold, because you will need to cut in the butter in the flour. Similar to the pastry making process.

My food sketch; After so many days I got back to my paints and brushes 🙂

HOW TO MAKE BREAD – BEGINNERS RECIPE